Why UI/UX Redesign Can Fail

No matter how successful the site was at the time of its creation, after 5 years, it becomes old-fashioned. After all, your business is expanding; technologies are becoming more sophisticated; companies release new and powerful user devices. The site must fit modern trends to remain relevant and be trustworthy. That’s why a redesign is needed.

The life cycle of any site or application consists of six stages:

The sixth stage is essentially the final “expiration date” of the website. A competent redesign will help give a new lease of life to the site/application. But this process has its “pitfalls,” which are worth knowing about. Also, considering the cost of a UI, you need to understand the consequences of the redesign.

The first and most important from all consequences is that people do not like changes. When someone uses the application quite often, he/she gets used to the interface and functionality and notices even minor changes. If the way you access any function changes, the user gets lost and annoyed. Thus, micro-aggression occurs. And if the changes are tangible, a customer may even stop using your platform.

A conspicuous example of a redesign that failed is Snapchat’s friends' story. Designers decided to change the familiar functionality fundamentally, and combined the friends’ stories with chat, leaving a separate block for the promoted stories.

Users did not like the new navigation structure, so within a week, the average rating of the application fall from 3.1 to 2.4. Advertising viewing and revenue decreased by 36%. It was a real disaster, so six months later Snapchat returned the original version of the friends' stories.

Therefore, if you still want to change the site/application globally, it is worth adding small contextual prompts. They will help users quickly understand the changes that have occurred.

Now let's take a look at the main reasons why a redesign can fail. 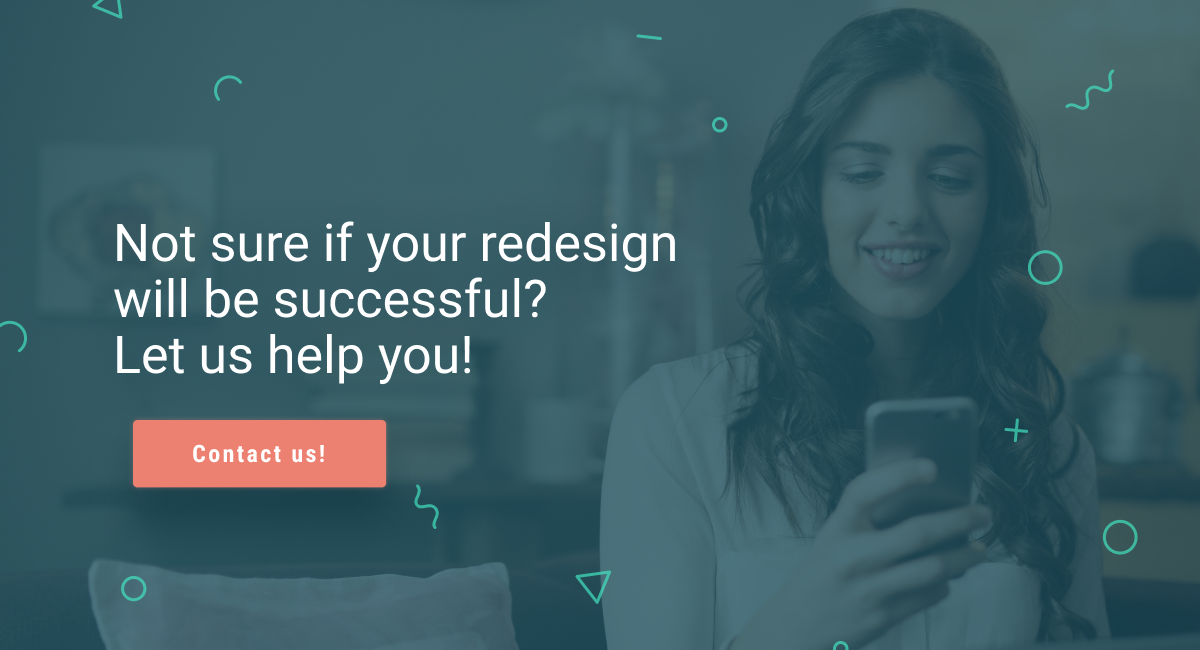 Redesign Can Cause Google Ranking Dropping

If your redesign involves changing the URLs that brought you most of your traffic, you should be very sensitive to the key addresses of the pages and correctly set up redirects. SEO will not suffer after the redesign. Evergreens’ specialists are experienced in sites redesigning without ranking dropping.

New Sites Usually Have More Errors than Old Ones

This issue applies to the technical part of the project. In a world where the site or application should not load for more than 3 seconds, every bug is a traffic killer.

Developers and designers often try to put all the best into one platform and overload it as a result. As time goes by, errors come to the surface that could be blundered away during development. As a result, the system works much more slowly. Thus, half of the target audience is lost.

Test your new design in several stages before launching to avoid problems caused by redesign mistakes. It is best to use a specially created group of dedicated users for testing. Or launch a beta version and monitor the reaction of the audience.

If you do not follow design trends, but decide to update the site or application, you may fail. There is a high probability that your design will be old-fashioned, which is why you risk losing all the traffic.

Therefore, before making a redesign of the application, you should consider the operating system requirements (iOS or Android) and how popular applications or sites look on the smartphone screen.

By making the functionality look like high-conversion platforms, you simplify the use of your update, which will undoubtedly help things along. The main thing is not to copy someone else’s design and functionality, but to be inspired by them and do better.

Before you change anything, conduct a thorough analysis of your audience, find out what they like, and give the, what they want.

Color is of the utmost importance to a site or application. The color scheme should not only be “beautiful”, but also reflect your business and your target audience. Therefore, changing the primary colors, consider their psychological impact on the user.

Designers or developers can “go too far” while creating something exciting. Such a design is tough to implement in the system, which creates all kinds of bugs on the platform.

A good example is the pizza constructor launched by Mamamia. Due to a poorly designed system, a good idea turned into a big problem, and site traffic dropped. As a result, problem fixing took a lot of time and resources.

A similar situation occurred during the redesign of Skype. It affected not only the UI, which became much more inconvenient to use, but also the tech stack. As a result, Skype began to freeze up and work worse than before.

There are known examples when a redesign is done only to make the site look new while updating only the colors, the shape of the buttons (Your UI Kit), and the logo. This approach brings only disadvantages to the business, as time and budget were spent, and site traffic remained at the same level or even dropped.

If you still make up your mind to redesign the site or application, you should clearly understand how to improve not only the appearance (UI) but also the functionality of the site (UX).

Although the redesign brings tangible benefits, it is always associated with the risks described above. To avoid them and increase traffic and conversion, you need to choose a competent designer who will make your resource better.

At Evergreen, we have over five years of experience in the UI/UX design of various web resources and applications. Want to know what exactly we can offer you? Feel free to contact us. We are always happy to take your business to the next level.

Do you doubt whether you need to take risks? We will answer all the questions!